I already said that I signed up for Lori Anderson's Bead Hoarders Blog Hop. But before I get to the hop, I'd just like to send all my best wishes and thoughts to you, Lori. You are such an inspiration to all of us in the blogosphere. I wish you good health - that's something we say to people here in Estonia :)

When I saw the idea of the hop - to use beads that you have stashed away for some special purpose or just because you didn't know what to do with them - I immediately knew which beads I would be using.


These have intimidated since I got them two years ago (maybe more - I think they were one of the first ones I got.) The red is very red and the spots look like oil on a puddle. But I decided to tackle them now.

And here is the result:

I made a bracelet using bead embroidery. I found that I have seed beads that have a similar oily shine to them and mixed them with red seed beads. They are embroidered on red felt and the bracelet has a copper clasp.


Thank you, Lori, for throwing us such a fun event! Here is a list of all the other participants, be sure to hop by and enjoy their work as well. I myself will be doing that some time next week, I am currently renovating my home :)

PS. Sorry this post wasn't up earlier. I scheduled it for midnight, but for some reason, blogger decided to put it in drafts instead and not publish it. Ah, the wonders of modern technology.

Hi. Sorry I've been gone for so long but the past few weeks have been insane and so will the coming few weeks be for me. So I'm using these early morning hours to write an update.

On July 6 there was a big handicraft fair in my hometown and naturally I spent the weeks leading up to that preparing for that... making stuff and putting price tags on items and just making sure everything is in order. At the same time my little shop on Facebook really took off properly - people are ordering things and they are requesting custom made items, so I was also trying to stay on top of all that. This is almost turning into a full-time job for me.

Here's a picture from the fair

In the bacground you can also see bags that my mum made. We were both selling that day, but I ended up chasing my little sister for most of the time and spent the last two hours in a basement making a big tea mug from actual clay. This was fun for me, because I haven't touched actual clay in years. And as I have prior experience, the lady instructing the little workshop promised to get in touch with me so that I could glaze my own mug :)

But I got ahead of myself. Leading up the fair, I was mostly busy with polymer clay. Lot's of it. I don't think I ever want to see it again :D I already posted this picture on Bead Soup Cafe, but

You can see some national Estonian motifs here, too. Especially on the ones with a black background.

At one point I also managed to sing up for Lori Anderson's Bead Hoarders Blog Hop, where the participants use the beads they have been hiding from the world for far too long. The reveal will take place on July 20. Here are the beads I will be using: 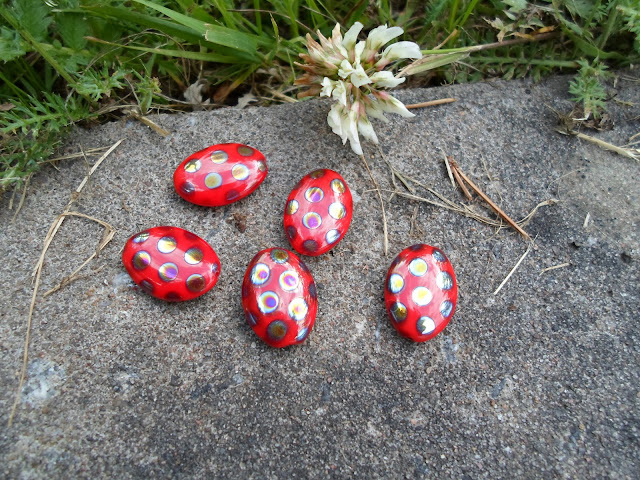 Up till now, I've just been too intimidated by them. And I do think that these were some of the first beads I ordered. But the red is just so bright and the purplish (more like oil on a puddle - coloured) circles are so nice that I just have not been able to do anything with these. So - challenge accepted!

After all the madness of the past weeks, I crashed on wednesday and took completely ill for two days. Must take better care of myself.
And now I'm going to write my June Favourites post. Finally.
Posted by Gerda at 09:15 No comments: 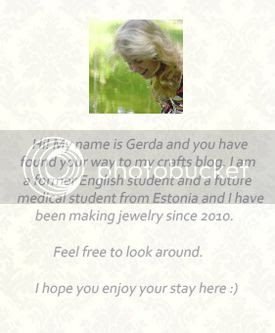 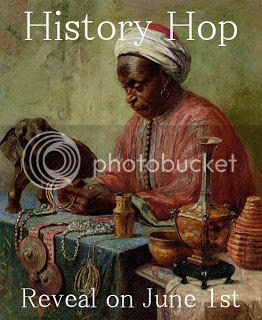